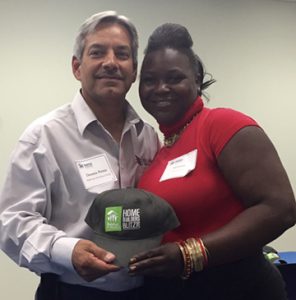 During the week of June 6-10, professional homebuilders from across the country will help nearly 250 families build strength, stability and self-reliance through shelter during Habitat for Humanity’s annual Home Builders Blitz.

In Orlando, Bellavista Group is one of eight homebuilders helping nine area families build a place they can call home.

The nine homes will be constructed at the nonprofit’s Butler’s Preserve community, which is slated to have 59 homes at completion in mid-2017 (51 single family and four duplex units)

The bond that is shared between Melissa and her fourteen-year-old daughter Jazmine is like no other. Melissa was previously homeless and credits her strong determination and faith for overcoming life’s obstacles. She is currently living in a re-developed hotel room that only provides a small refrigerator in the kitchen. Though Melissa works full-time as a cashier at Walmart, she does her best to spend as much time as possible with her daughter.

Completing 300 hours of sweat equity was a challenge since Melissa takes the bus, but she was committed to get it done and has continued to volunteer. Once her sweat equity was complete, Melissa included her daughter in the process and let her pick out the finishes and colors of their home. Melissa is extremely proud that Jazmine continues to excel in school so she can be successful in the future. Becoming a Habitat homeowner will allow Melissa to continue to thrive as a mother, give Jazmine the space she needs to study and provide a kitchen where they can cook and spend quality time togethe

We use cookies on our website to give you the most relevant experience by remembering your preferences and repeat visits. By clicking “Accept”, you consent to the use of ALL the cookies.
.
Cookie settingsACCEPT
Manage consent

This website uses cookies to improve your experience while you navigate through the website. Out of these, the cookies that are categorized as necessary are stored on your browser as they are essential for the working of basic functionalities of the website. We also use third-party cookies that help us analyze and understand how you use this website. These cookies will be stored in your browser only with your consent. You also have the option to opt-out of these cookies. But opting out of some of these cookies may affect your browsing experience.
Necessary Always Enabled
Necessary cookies are absolutely essential for the website to function properly. These cookies ensure basic functionalities and security features of the website, anonymously.
Functional
Functional cookies help to perform certain functionalities like sharing the content of the website on social media platforms, collect feedbacks, and other third-party features.
Performance
Performance cookies are used to understand and analyze the key performance indexes of the website which helps in delivering a better user experience for the visitors.
Analytics
Analytical cookies are used to understand how visitors interact with the website. These cookies help provide information on metrics the number of visitors, bounce rate, traffic source, etc.
Advertisement
Advertisement cookies are used to provide visitors with relevant ads and marketing campaigns. These cookies track visitors across websites and collect information to provide customized ads.
Others
Other uncategorized cookies are those that are being analyzed and have not been classified into a category as yet.
SAVE & ACCEPT
Skip to content